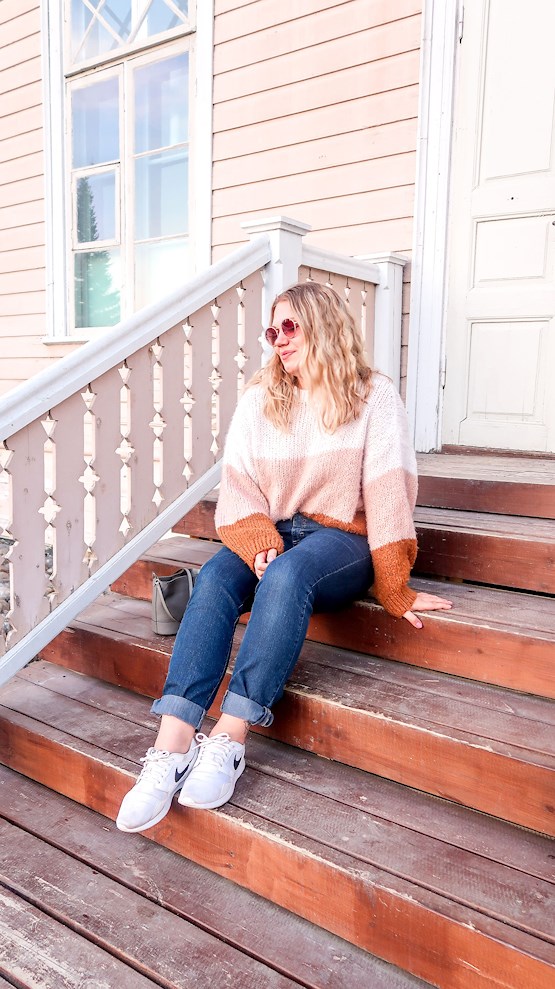 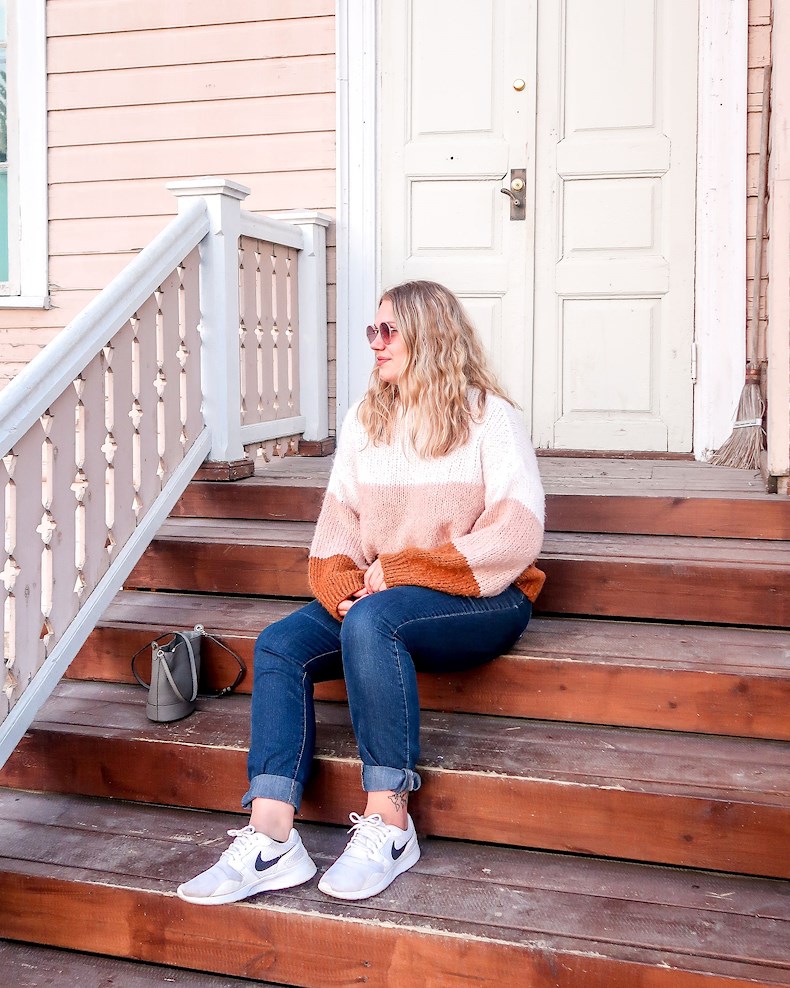 //We took a road trip to Northern Finland on a weekend, with Sara and Emma, to admire the beautiful fall colours in the forest. We wanted to do an easy, quick, and small budget trip to have our minds off from all the weekdays' things. We found a low budget place to stay for two nights, but well, things happened during the weekends, so that the budget had to be expanded for a bit. //We stayed at Ruka, and first things first, on Friday we hurried up the mountain to come back down via the slide that was build on the mountain. When we sat on the ski lift to go up, the slide looked a lot scarier and faster than what it was. The slide was so slow, in every turn there was a slow down sign and when I actually pulled the brake even for a little the speed slowed down completely. Then I had to push the sled to get some speed again. But the slide was great to see the beautiful views during the trip down the mountain! And I had a change to take pictures and video as the ride wasn't that fast. //On Saturday we drove to Oulanka National Park to hike the Pieni Karhunkierros trail. Such pretty autumn forest! I'm not surprised at all, that karhunkierros trail is one of the most popular hiking trails in Finland. There's a variety of different nature there: white-water river, mountains, cliffs, bogs, hanging bridges, bonfire pits, and desolate huts to stay for a night. Pieni Karhunkierros trail is about 12 kilometres long, and we had two drink and food stops along the way. We packed snacks quite a lot in our backpacks. We knew that we would stay and enjoy the nature for hours and in the end it took about 5 hours for us to hike and take pictures and enjoy the views. //After the hike, my car then decided to leave at the side of the road. I had to call a tow truck. Apparently, it wasn't a serious defect, but the car wouldn't let drive, because of the red malfunction indicator light. So, we ended up spending Saturday night on the couch watching Love Island and Sohvaperunat (Couch Potatoes) on TV, while drinking tea to get warm. 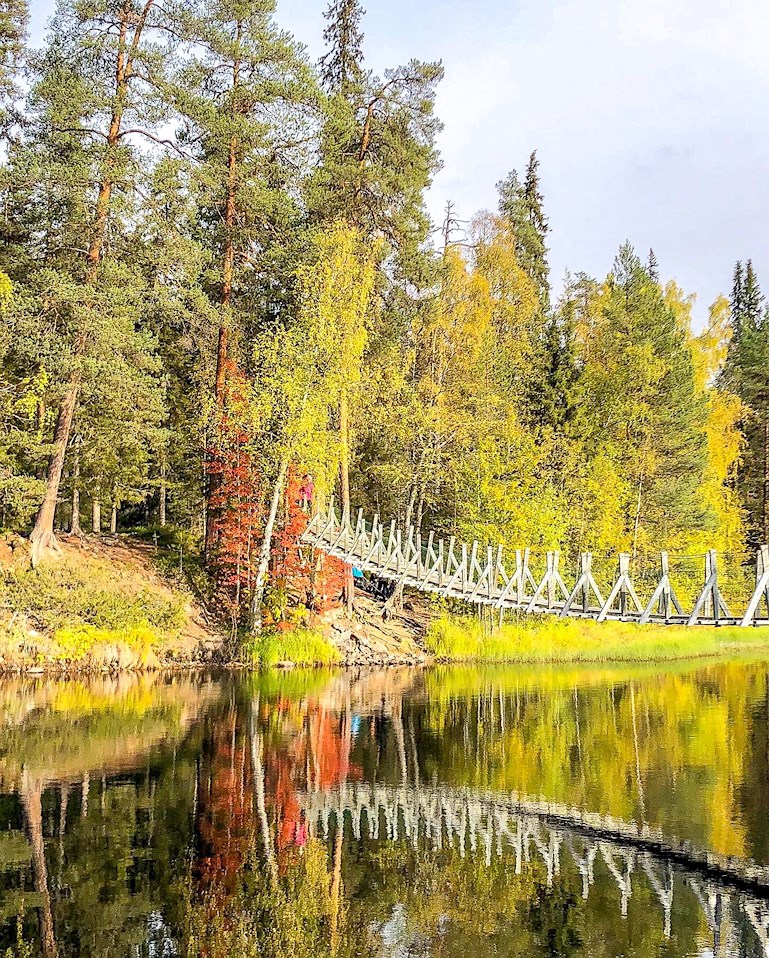 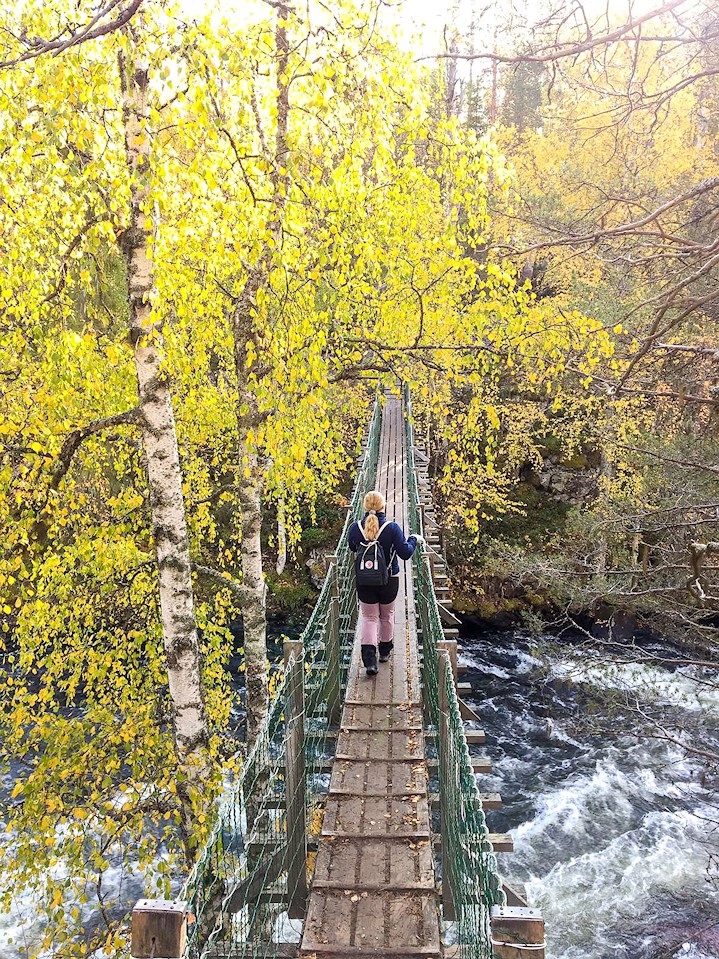 //On Sunday, we picked up the car and tried to drive back home, but we only got to drive about 60 kilometres when the malfunction light showed up again. Then I called my dad and asked him to come pick us up. We finally got back home on the same day, and car got fixed the next day. So, all good at the end. What would a road trip be without some worries with the car.

WARNING: does not follow my usual topics, or writing style.

// As I’m in between jobs, it's Friday night and I don't have to go to work. I’m thought of sharing something about my previous job. That I actually did for four years! // Well, I’m a taxi driver. Yes, it’s still a largely men ruled occupation, which has caused me and my female colleagues some hard times.

About the business field in general, the work shifts mostly offered for employees are night shifts and weekend shifts, because owners want to have weekends off from work. Then, at least in our company, the shifts usually are 10 to 12 hours long, which means that a lot can happen in half a day. // Of course I have good memories and bad memories from work, don’t we all. But. Now I’d like to share some of my memories with you.

// First, let’s get the unenjoyable stories under the way. So... I’ve seen an extremely painful looking knife cut on the back of a drug head. He told me the story behind the cut and then offered me some pills, that according to him, caused serious hallucinations. This happened while I was driving him 25km out of town. Then, he broke into ‘his own’ apartment to go get money to pay for the ride, and well, he actually ended up paying the amount in cash and even tipped me for 20€.

Well, then there’s also those sexually charged situations, where guys won’t willingly take the answer no. They touch your hair, put their hand on the knee and up on the thigh, or on the shoulder and neck. They want to kiss, if not on the mouth, on the cheek or on the back of the hand. They won’t leave the car until they’ve actually verbally sexually abused you, by telling you how much they would like to lick your wet pussy, and how they could easily rape you right then and there, at that night shift you’re working on. Yeah, I’ve heard all of them. // But, then there’s always those really good memories as well! Like when I got offered a job opportunity as a live show director for an online tv. As we ended up talking about our past educations and interests ,the job just got offered on the table, and I actually googled them out and was kind of excited, but then I came to the conclusion that it wasn’t really for me.

Another good memory, that pops to my head, was a fun trip when this group of guys asked if I would take them to a neighbourhood outside of town, wait there for about half an hour and then take them back to the city. Well, I was okay with that offer and took them there to see their friends. So, we were there and the guys asked me to come hang out with them at their friends music room, and well I did, it was fun. Then the half hour went by and the guys wanted to go to the near by pub to have a beer or two. I took them there, and sat on the table to talk with them for another half an hour or so. When I finally asked them when we they might want to go back to the city, or would they stay there for the rest of the night, they were fine leaving to the city. We had been there on the journey for at least two hours then. We listened to some good music on the way back to the city and they were really happy with the ride. It was a fun trip by both parties. They actually reminded me about the trip as they've been my customers later on. // The idea of posting this about my experiences at work, was on the one hand to tell people about what kind of a job this is for a young woman, as I have been asked many many times by customers that how do I have the courage to work on night shifts and as a taxi driver in general. They think of is as such a dangerous occupation for a young woman. Also, on the other hand maybe some newcomer on the field might see this post and have a better idea of what might or might not be expected, depends on the luck at work, while working. This post is also a little reminder of people using taxi service or any other service for example McDonalds drive-in or hospital emergency room, that all of the service people are at work. It doesn't matter what time it is, and what kind of place it is, they're doing their job as service people and don't appreciate hearding smart-ass, or sexual comments, or might not appreciate talking to customers on social media channels or outside of work, as it's their freetime.